For the ending, see Nimrod Ending.

To be added
Nimrod is the main protagonist of Agony , whom the player plays as, and appears in SUCCUBUS, as a king of Hell. In every attempt, his former goal is seeking his ways to escape the nightmarish universe of Hell.

Nimrod is a middle-aged man, with dark gray eyes, long black beard and long straight hair, and he has an masculine body with pale pink skin. He does have black veins coming from the sides of his eyes, indicating the amount of unholy power that he was given by the Red Goddess and his change from human to half breed.

But after being condemned to Hell, his form is a frail body of a man, with bleeding eyes, and is hairless.

Nimrod is a Megalomaniac tyrant king, he has always been wishing to rule the Heavens and dominate God. This lead him to ruthlessly take children from their parents to make them priestess, making workers work endlessly with no rest, creating cults, and sacrificing virgin girls. He shows lack of sympathy for his people, as proven when those around him obtained terrible luck and went mad after he obtained power from the Red Goddess. Though he does show passion to his mother and son (though it is unknown if they were affected by his powers), they too believed in his cause. But there are times where he points out to himself that he is helping the rest of his people even if it means to replace God (it is unknown if he truly worries for his people but is "little to true" at this point). He is also manipulative, as shown when he made everyone believe that they are doing this for their God and the Red Goddess.

But his path soon lead him to his own demise; betraying the Red Goddess and using the power She gave him to attempt to dominate Her as well.

Nimrod is a former king and martyr. He has been obsessed with the need to dominate heaven and becoming a god. This lead him to worshiping the Red Goddess, forming numerous cults, and performing rituals and sacrifices. Throughout his endless journey to obtain power, the Red Goddess answered his call and granted him power, making him a half-breed between demon and human. Nimrod continued to create monuments to honor the Red Goddess, even creating a tower that is believed to "reach the heavens". The Red Goddess gave Nimrod another test to grant him even more power, if he wished to partake this task. Nimrod agreed and was tested to live and survive the blizzard mountain for several days, and perform a ritual to confirm that he completed his task.

There were worshippers along with him during that time, but Nimrod killed them to use their bodies to warm himself. Nimrod survived the freezing mountain, and was awakened back in his kingdom. He became stronger and continued to pursue his goal to rule the heavens. However, the power he obtained had a cost: misfortune would befall on those around him; becoming hysterical and homicidal. As God saw Nimrod's power growing, He brought a plague on his kingdom to attempt to cause fear to Nimrod, however he was unaffected by what God did and was more furious that God did not face him and blamed him for the chaos brought to his kingdom; not knowing that it was his own power that brought terrible luck and chaos to those near him and not God. This lead him to push his workers even more to build his tower. However when Nimrod became more desperate and eager to gain even more power, he soon sought to rule Hell as well, even if it meant to make the Red Goddess bow down to him.

As Nimrod begins to fall to Hell, he awakens in a weak and fragile body. Losing all his powers, he now attempts to escape Hell.

There are multiple paths to different endings depending the choices Nimrod makes:

The Normal Ending can be obtained without doing any of the following (Kill 30 or more enemies, Save all the Angels, or Triggering some post side scenes of characters in certain parts in Hell). Nimrod arrives at his former castle and speaks with the Red Goddess on his/her throne. She asks Nimrod to sit on his throne and asks him to do one more task to prove his loyalty to her. She then gestures the Succubus to kill Nimrod in his current form, releasing his soul to enter The Tower of Babel, where he must fight the Beast. After the battle, Nimrod possessed the Beast and becomes powerful once more, but then attempts to betray the Red Goddess once more to try to kill her, but little to no effect. He fly's up to the sky and attempts to strike her down again, and strikes her, Nimrod then accidentally broke the gate between Earth and Hell and the Red Goddess then pulls his soul out of the Beast and speaks of her intentions. She explains how she needed Nimrod to possess the Beast and betray her again to let his inner anger to break the gate to bring the apocalypse upon mankind. She thanks Nimrod and gives him a farewell kiss, bringing him back from the dead. Nimrod awakes from the ocean and swims up back to the landscape. Relieved that he has returned from Hell, he also noticed that Earth looks very different, and that he is further in the future, and sees modern ocean buoys and an lighthouse (both that never exist before). Then the Beast rises up from the ocean, turning the ocean red, the skies raining blood, and locust flowing out from the beast. And the Red Goddess mounted on the Beast, giving Nimrod a gesture, indicating that she is just giving Nimrod the taste of betrayal that he has given her twice before. The Beast walks forward not noticing Nimrod, and the last thing he ever saw, was the Beasts foot, coming down on him.

The Evil Ending can be obtained by Killing 30 or more enemies (that includes Damned Souls and Demons). Nimrod arrives at his former castle and walks towards the dinner table and meets the Red Goddess along with the Succubus, the Succubi, and other female demons. She gestures Nimrod to sit, and tells her candidates "See girls, that's what a real man looks like" in an seductive voice. She then offers Nimrod a drink, and Nimrod accepts it. As all the demons stared at him, to see if he will drink the bloody wine, and Nimrod drinks. Surprising them, as one of them says "He drank it, he drank it!". Nimrod then begins to become dizzy and was told by the Red Goddess that "Sorry, that's really strong liquor there." in a sarcastic manner. Nimrod then feels intense pain and transforms into a Half Breed Chort, she then gestures Nimrod to rise up and take which ever woman he wants in the room. He looks at the Succubus, and takes her, claiming her for himself and has sex in front of everyone. But after his moment, he then noticed that he feels dizzy again, as the Red Goddess says "Don't worry, we will always be together". After a few possible hours later, Nimrod finds himself imprisoned in the spiders lair and howls in anger and sadness...

The Angel Ending can be obtained by saving all the Angels in the game. Nimrod runs into the 2 Angels that helped him with the insight they gave him, they gestured Nimrod to come forth and holds hands. They fly into the sky along with Nimrod, but then they heard the Red Goddess laughing, saying how she never expected him to betray her for angels. She rises up and grabs Nimrod, telling him that they can take his body but his soul will always belong to her. She rips Nimrods soul out of his current body and has now lost his chance to escape Hell with the help of the Red Goddess.

The Baphomet Ending can be obtained by defeating him for the first time, and reaching a certain part in the Mushroom Mind. Nimrod walks to the different direction in the Mushroom Mind, and gets ambushed by Baphomet, he then speaks to Nimrod saying that he finally found him. He then picks up Nimrod and rants how his soul should belong to the Dark Lord, and not to the Red Goddess or her Beast. He rips Nimrod into pieces and captures his soul, containing Nimrod into a endless abyss of darkness within the maw of Baphomet...

The Nimrod/True Ending can be obtained after beating the game with both Bad Ending and Succubus Ending. Nimrod descends deeper in the castle and finds his new lover; The Succubus. She then speaks to him, of how he needed virgins for an upcoming ritual, she sadly says that she cannot help him any longer at this point, but says that they can still have there loving moments. She gestures Nimrod to come to her saying that the child is ready to see him, and that she is ready. He then enters her, and has sex the second time, as he becomes distracted in a blissful moment, the Succubus raised her dagger and stabs the child inside her. Nimrod then backs away in fear of what she has done to herself, but the Succubus only said "It is done...". He then noticed the door behind her opened and was told by her to go ahead, and not to worry. Nimrod walks forth to his throne room, as demons notice him, they worshiped him as their god, he wears the Garments of Adam and sits on his throne. He closes his eyes, knowing of everything he has done and gone through, the many countless people he sacrificed. As the new lordship of hell, with his new lover - the Succubus, he opens his eyes accepting his role as the new King of Hell.

Nimrod became the king of Hell along with his lover and queen, The Succubus. But Baphomet has returned with an army of demons to reclaim Hell and holding Nimrod hostage to later consume his soul for unlimited power.

Nimrod meeting his own demise.

Nimrod performing a ritual after completing his test. 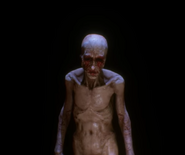 Nimrod in his Martyr body.
Add a photo to this gallery

Retrieved from "https://agony.fandom.com/wiki/Nimrod?oldid=2551"
Community content is available under CC-BY-SA unless otherwise noted.